At the East Region closer in Cecil County, Md., Karen Stalba, who endured a disappointing title defense last year after winning the 2011 Division 1 championship, got back on top in Top Alcohol Dragster, and incoming points leader John Anderika clinched the championship by personally taking out the only two drivers who had a mathematical shot at overtaking him in Top Alcohol Funny Car.

Stalba, who DNQed at five of six regional event last year and had won just one round so far this season, went from the No. 8 qualifying spot to victory, taking a final-round decision over current points leader Dan Page, 5.51 to 5.70. "For a year and a half, it's been nothing but frustration," Stalba said. "We got lost. Nothing went right all year last year, nothing went right all year this year, and nothing was going right at this race. We smoked the tires on both test runs on Thursday and when we did it again in the first qualifying session, I thought, 'Man, I hope we can just qualify. There were a lot of long faces around here."

Stalba ran a 5.53 on her final qualifying attempt to make the cut and upset No. 1 qualifier John Finke, who dominated qualifying with 5.30s on both runs, including a 5.31 that held up for low e.t., with a 5.51 in round one. Finke drove into smoke and was the third driver in a row not to make it down the right lane, which has always been the lane of choice at Cecil County and was throughout qualifying.

Dan Mercier ran a 6.67 in that lane and lost to Page's 5.52, and No. 2 qualifier Rich McPhillips slowed to a 6-flat in a loss to defending event champ Richard Bourke's 5.66. The only driver to win from the right lane was Jackie Fricke, who ran a 5.47 in Joe Cantrell's JC Auto Glass dragster to edge Wayne Morris, who ran a 5.54 in Cantrell's old car in the only close race of Top Alcohol Dragster eliminations.

Stalba stayed consistent in the semifinals with a 5.48 win over Fricke's up-in-smoke 10.09. Page set low e.t. of eliminations in the other semi with a 5.43 against Bourke, who had trouble firing, made it to the line at the last minute, and struggled to a 5.93.

In the final, Stalba became the only driver in either alcohol class to win in the right lane since Fricke beat Morris in the first pair after the National Anthem with a consistent 5.51 against Page's laboring 5.70. "Low 5.50s usually aren't enough, but on that track and in those conditions, it was exactly what we needed," said Stalba, who last scored two years ago at New England Dragway, also over Page in the final. "We tried something before the final session, it worked, we went further in that direction in eliminations and it worked even better, and the next thing you know, we won the race. It just goes to show that you never know, and hopefully, this was the start of a turnaround."

Anderika struggled in qualifying, ending up fourth in the short five-car field with a best of 5.87, but he came to life when conditions changed in eliminations. He won a crucial first-round race with Dan Pomponio, who won the first two regionals of the season, 5.72 to a tire-shaking 14.08, and beat Todd Veney in the semifinals, 5.70 to an up-in-smoke 9.95. Either of them could have won the regional title with a win at this event.

There was no runner-up. D.J. Cox, who hurt an engine on his only qualifying run, a 5.67, wounded another in a backpedaling 5.84 first-round win over Marie Ferriolo and didn't return for the semifinals. "I could have dragged it up there for the semifinals, taken the Tree, and shut off," he said, "and I could have done the same thing in the final, hoping the other guy red-lighted or crossed the centerline or something, but I'd had enough fun for one weekend."

With the win and the regional championship secured, Anderika putted down the track to a 21.58 at 50 mph for his second career win and second in a row. "This makes all the runner-ups and everything I've ever been through worth it," said Anderika, who was 0-10 in final-round competition from 2008 through June of this year. "We beat both of the guys who could have passed us, and everything happened the way it should have. Not many people knew, but I said at the beginning of the year that this is my last year driving. I'm retiring. Maple Grove is going to be my last race, and this is a perfect way to go out."
Posted by Admin at 7:19 PM 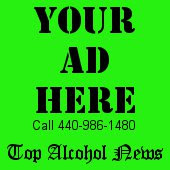